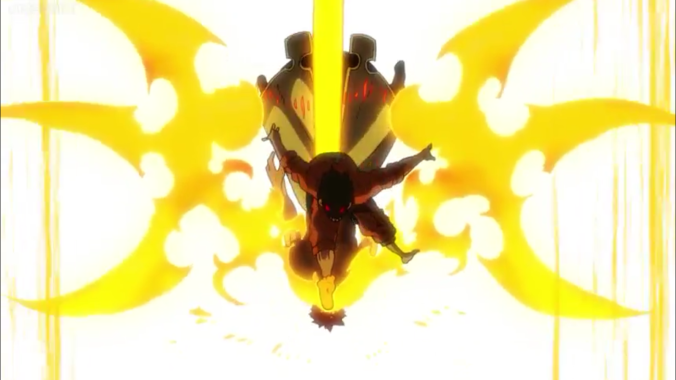 The eighth and ninth episodes of Fire Force have come out and, being late as I was, I’ve decided to recap and review them both at the same time. It’s a good thing I did too, because it brings the arc to a conclusion and I have a lot of thoughts that need to be expressed. So let’s get right into the Recap and Review.

The eighth episode immediately starts out on a misty background with talk of an evangelism going well by an unknown party while the adults of Squad 8 go over the data they have with Hibana. They conclude that insect genetic data is somehow involved with the transformation of artificial Infernals, which tells us that the main cause might be related to insects. How Squad 1 is related to that is something Shinra has to figure out within the month that are stationed there.

Of course, it’d probably be easier if the Lieutenant  didn’t come by every morning to check on them. Hibana came by as well to elaborate that she believes the culprit is a Fire Soldier, meaning one of the people Shinra will be working along with. We then get to learn more about the rookies during breakfast before Tamaki’s fanservice ruins a perfectly good moment. Fortunately,  Infernals appears and so they get divided into groups to find the five victims.

It’s there we see as Shinra and Arthur witness some poor soul get an insect shoved into him and turn into an Infernal. Shinra gives chase after the culprit, leaving the Infernal behind, in time to see Rekka and Karim. So when they get back to the cathedral, they decide they need to investigate the two.

The first one they check is Karim, with Shinra having promised to get Tamaki’s number for Juggernaut if he was willing to distract the guy. Arthur breaks into the room in a pretty blatant manner and they ultimately end up getting Karim’s attention, who revealed he was also investigating the cause and thus he had the bottle. That basically narrows it down to Rekka.

We then cut to Tamaki as she lures children to Rekka under the guise of finding a method to prevent them from becoming Infernals. He then promptly knocks her out and starts to transforms them into Infernals. She wakes up in time to see it and ask what was going on, to which he explains that he was going to continue creating them for the Evangelists’ sake, looking for someone who suitable to contain the power.

He then beats the stuffing out of her before continuing, which causes a reaction with Shinra’s flames as one child manages to survive the transformation, meaning he was compatible. Tamaki, realizing she was out of her league, uses her fire power to send her tails skyward in a big, unavoidable signal to tell Shinra to get over there as he stomps her into the ground with the intention of killing her. Thus the episode ends with Shinra stomping him into the ground instead and asking a weeping Tamaki if she was okay.

Then we cut to the ninth episode, where we look into Tamaki’s mindset as she recalled the time she spent with Rekka even as he pounds her into the ground before calling for help. In that moment, which they took great pains to animate really well, you see just how overcome with emotion she was before the OP played. I cannot stress how much impact that moment had and I don’t even like Tamaki.

Anyway, Rekka naturally survived having his head crushed and promptly socked Shinra in the head for turning his back on him. From there we get a fight of capoeira vs karate with some grappling mixed in. Rekka intended to kill Shinra at first, but when the insects start reacting to his flames he realized that Shinra is another person the Evangelist is looking for since he has the Adolla Burst. Rekka then admits to being a child killer and they’re about to get into an epic fight, but the moment is naturally ruined when Shinra gets knocked into Tamaki’s bulging breasts because we can’t have the serious tension remaining unbroken for too long.

I hate the fanservice in this series. I really do.

Anyway, Shinra realized that he was outmatched in terms of fire power so he utilizes his mobility to take the fight into the air where he has the advantage and deliver a hell of a kick. The children watching the fight are naturally frightened and so Tamaki goes to keep them safe while Shinra tries to shrug off being overheated, a condition where a third generation uses up the oxygen in their body as fuel for their flames. That bodes poorly considering Rekka managed to stand back up and basically rant his part in the master plan before stating his intention of taking them as children and raising them into cultist, which tips Shinra off as to what happened to his brother.

Of course, before the nutbag can go through with it, Karim freezes the bastard in place to try and stop him from burning himself up. They fully intended to interrogate him later, but he gets shot through the heart by a sniper who then starts taking shots at the others and ends up blowing the arm off of  Huo Yan. Shinra puts up a smoke screen to give them some cover before Tamaki sends her tails out and Karim freezes them to show that they know their position and block their sight.

The Sniper and her accomplice then retreat, leaving Shinra and the 1st squad members safe for the moment. Tamaki is informed that while she may have been tricked into it, she will have to be punished for her part in it, which she accepts. As for Karim, he vows to assist the 8th in their investigation since Rekka’s actions and death are due to the Evangelist and their cult.

In the end, the training for the different squads was cancelled and Shinra headed back to the 8th Squad. Tamaki has also taken up residence with the 8th as a part of her punishment for the incident, as she’s suspended from duty with the 1st due to her part in things. As for Arthur, he got lost and they’re searching for him because he is legitimately that stupid and the episode the ends with us seeing him in a desert somewhere.

So, these two episodes essentially mark a huge turning point in the story in that we learn both that there is a malevolent faction working to turn people into Infernals in search of special pyrokinetics, and that Shinra is one of them. Moreover, they intend to gather them up so that they can turn the earth into a second sun and basically kill everyone.

They’re a doomsday cult and Shinra’s one of the keys to ending the world.

Now, this revelation has been brought to us by a fanatic who looked and sounded insane, so it fit like a glove. But you have to realize that for Rekka to have been that crazy all along and no one noticed, he would have had to been like that for a long time. He was a plant in the 1st Squad and the ease at which he was able to lure people in because he was a member of the clergy showcases just how much influence that they have.  The guy has admitted he turned numerous children into Infernals in search of those flames that Shinra has, and that was only possible because of how deeply the church was tied into the 1st Squad.

If you watched Soul Eater, then you know Justin was Death Scythe who was similar to this guy, despite all the external similarities to Black Star. They were both religious and powerful, but they were also worshipping what amounted to an evil god whose intention would have brought an end to life as everyone knows it. That alone should give you an ideal as to what kind of being this Evangelist must be and the nature of their followers.

In all honesty, I was a bit surprised at how violent they let Rekka get with Tamaki. But there was also something beautiful about the way that Tamaki struggled to get tears out and how they focused on it when Shinra arrived. It shows just how deeply the betrayal she felt was, and how relieved she was that Shinra came.

I just wished they didn’t ruin it with all the fanservice.

Speaking of betrayal, I can’t really express how deeply Rekka’s betrayal hit all of them.  The dude was an insane fanatic who openly admitted to not only turning several children into Infernals in search of compatible ones, but the end goal was to essentially turn the planet into a sun and kill off the general population. Yet he hid it well enough that his best friend and Tamaki, who admired him, never saw just how twisted he was and they clearly mourned his death.

So, overall these two episodes were excellent… barring the fanservice.