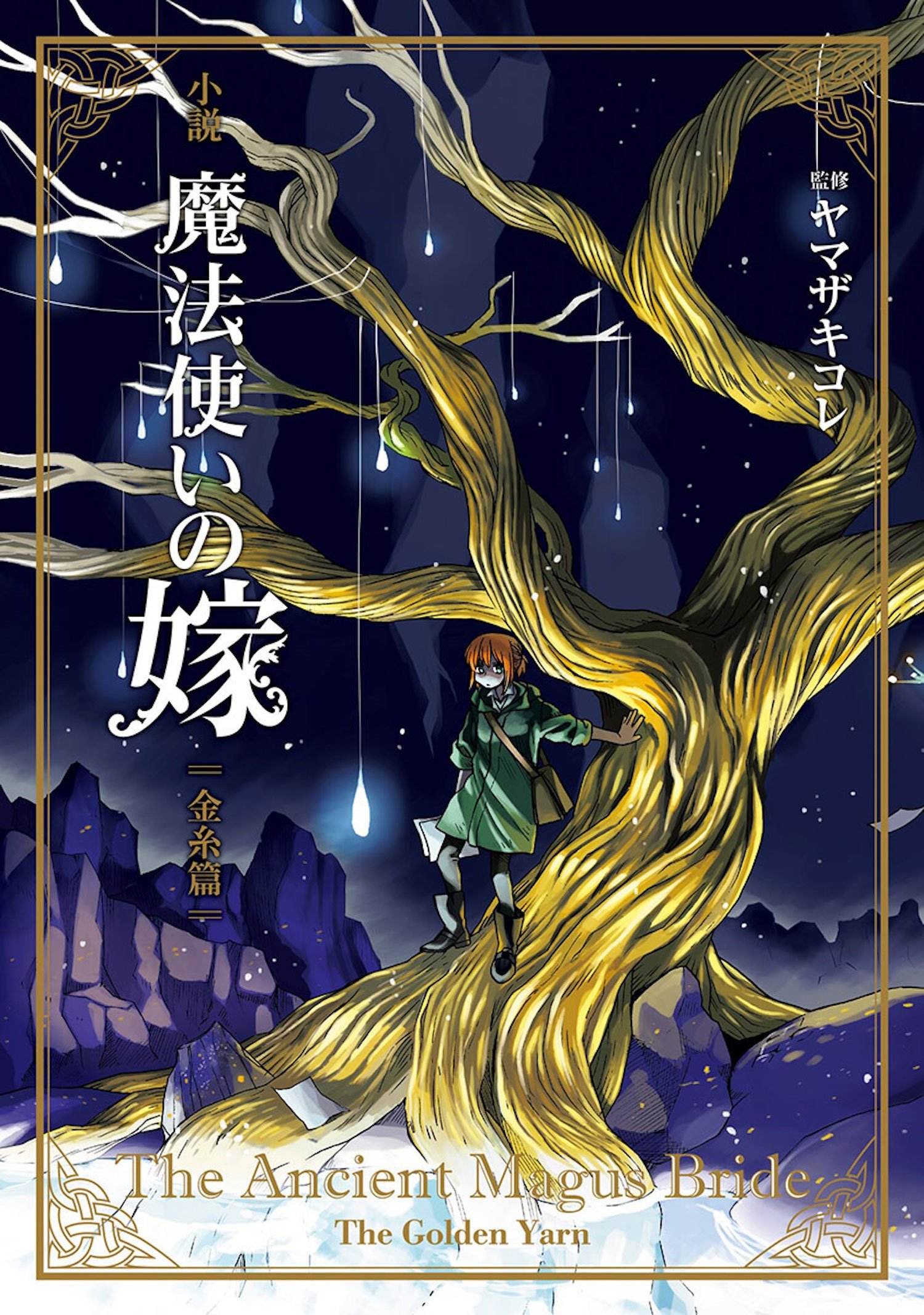 Okay, it’s been a while but I said I was going to do this review so I will. As you may know, The Ancient Magus Bride has recently come out with two Light Novels called The Golden Yarn and The Silver Yarn. These are a series of short stories that take place within the verse, though the time period varies from before Elias met Chise to sometime afterwards. There were a number of good stories within The Golden Yarn, so I plan to go through each one and give my opinion before summarizing how good or bad it is overall.

This short story centered around the centaur Hazel, who you could be forgiven for forgetting because he only showed up a total of three or so times within the main series. However, for such a minor character his story was rather heartwarming as we see the very evening that he bid Chise and Alice goodbye he promptly hoofed it over to his Aunt, who we learn is a two-legged centaur and as a result has been shunned and left out of her herd because of how their society works. No matter how much she looks human, her mind is that of a centaur and it affects her in ways that are truly sad enough that I actually felt my heart move when she begged him not to leave her and you realize she’s a very lonely person. The story instantly made Hazel one of my favorite characters for being a good boy and I learned more about the culture of centaurs, so I recommend it wholeheartedly.

I think we all know the story of Joel Garland and the Leanan Sidhe Redcurrant, it was one of the saddest moments in the anime and moved even my black heart to tears. Well get ready to start the waterworks again, because this short story shows exactly how they met and how she fell in love with him. Even though they were literally in different worlds, you can see both how Joel was aware of her presence subconsciously and how hard Redcurrant took falling in love with him. I loved this story despite the fact that it took a bludgeon to my rib cage and left me in tears since I knew how it ends, so I recommend it.

This story was a miss for me, as it follows a girl who was gifted with Sight like her mother and has to get a crystal to its home while being chased down by a mass of grudges. I did like some aspects of it, such as the guardian spirit element, but overall I just couldn’t click with it because it wasn’t all that interesting to me.

If you like the Silver Lady and wanted to know more about her then right here and now you have the best short story you’ll get to date. It follows after she went from a banshee to a brownie and tells about her relationship with the owner of the house before Elias showed up, which is where she learned all of her cooking skills. We also learn that Spriggan is just a big softie when it comes to her, constantly paying her visits and such. I wholeheartedly recommend it.

This is easily one of the best stories in this book.  The gist is that a self-taught magus named Alex has come to a cursed swamp in an attempt to purify it due to the fact that she sent her sister there and got her killed. Since she didn’t have a teacher she learned magic the hard way, struggling and clawing for power after having her heart broken by the betrayal of her family and trying to make amends. She reminded me of Maggie Holt from Pact, who was one of my favorite characters, and this is hands down one of my favorite stories, 10 out of 10, I’m telling you right now I want a sequel to this along with a spin-off following her.

The Man Who Hungered For Trees

This story was another hit-or-miss for me. On the one hand, I didn’t really sympathize with the protagonist so I didn’t really care much about his ultimate fate in what amounts to a horror story. On the other, I liked how magic and technology was integrated to show how it can make programming beyond the ability of most people today. It’s an okay read, but not one I’d go back to very often.

The Sun and The Dead Alchemist

Another great story here, one that follows what appears to be a Japanese woman as she goes to visit Elias about his new bride. It turns out that said woman is actually an evil spirit of an alchemist who tried so hard to become a mage that he became something in-between and that body was a Sleigh Beggy that he loved and lost due to basically not wanting to share her education, showing what could have happened to Chise if Elias didn’t get others to help him with ensuring she didn’t die from her own magic. The spirit in question is actually quite knowledgeable, but the longevity and its nature of absorbing memories from others has basically made even remembering what it was doing an hour ago difficult. I can’t quite describe why I like how it falling in love with a Sleigh Beggy and losing her changed it so much, but it does paint a scenario to where I think I can see Elias’ relationship with Chise playing out in a worst case scenario.

The last story of the light novel and its, unfortunately, a hit-or-miss scenario for me. The main protagonist is an New York otaku changeling who takes on a case to find a dragon’s egg in New York for Lindel and she’s is full into modern magic, with an electric loa spirit combing the web and a centaur trotting across rooftops. The makings of a Dresden Files-like story should make me giddy since Jim Butcher hasn’t released the next novel yet after years, but I just couldn’t get into her. I mean, her story about being a changeling is sort of like a watered-down version of Shannon in that she didn’t realize what she was until the child she was swapped with came to visit her (she treats him more like a brother though), and all the good parts don’t really make her seem interesting to me, but the story itself is okay.

Despite there being some stories I didn’t really like, the rest of them were good. The relationship between Joel and Redcurrant was sad because you understand their ultimate fate, but heartwarming all the same. As was the other stories that touched my not in the action-junkie sort of way, but in the emotionally satisfying kind of way. Even the stories that didn’t interest me were still decent enough, just not my thing for one reason or another. I can safely say that if you want to know more about the world and characters within the Ancient Magus Bride it’s a good read and worth the low cost (seriously its like $10 at Amazon despite being ridiculously thick for a light novel), but the moments with Chise and Elias are lacking so if it’s them you’re here for you can pass on it.