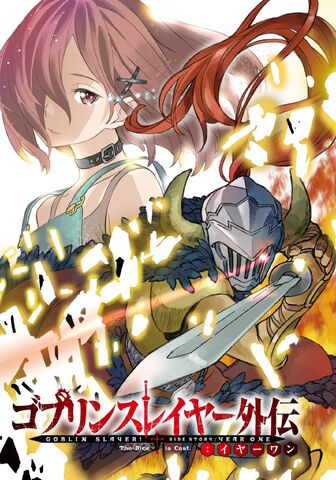 Well, I don’t normally do Light Novel reviews because it takes far more time to read and critique them. However, Goblin Slayer is one of the first Light Novel series I read and seeing how it all began was an experience I couldn’t pass up on. So I’ve decided to give a simple (spoiler-free) review of the Goblin Slayer: Year One Light Novel.

Goblin Slayer: Year One is basically the origin story of Goblin Slayer, taking place five years before the start of the main series where Goblin Slayer is a newly-minted Porcelain-rank, along with Heavy Warrior, Female Knight, Spearman, Witch, and a few other characters I will leave to surprise you. The Light Novel itself is roughly divided between two main protagonists: Goblin Slayer  and Young Warrior.

Goblin Slayer’s story follows his first raid on a nest solo, his reunion with Cow Girl, and setting out to prevent a village from being rampaged by over twenty goblins. If this sounds familiar then it should, because its basically the events of the different arcs in the first light novel of the main series.  However, being fresh from his training, he has yet to develop all the methods and techniques he developed  for the sake of killing Goblins. Because of that, he’s not the unstoppable Goblin killing machine that he is a few years later and he makes a lot of the same mistakes that the rookies from earlier did, only he survived the experiences and learned from them.

Young Warrior’s story is basically similar to the Ogre battle, in that the quest that’s being undertaken had an unexpected development and resulted in a near party-wipe. He was the only one to come out of it and still be an adventurer , but is now revenge driven to kill the monster responsible along with the other porcelain rookies we know and love. Theirs is a tale of the other dangers of adventuring outside of Goblins, where we see how others deal with the grief and difficulties of the world.

We also learn more about the world they’re in, some racial traits and why there are a depressing amount of orphans left over after that whole rise of the demon lord mentioned in Volume 1 that was beaten five years ago in this series.

Overall, if you’re into the series and want to see how it all began, you won’t be disappointed here. Pick it up at Amazon if you want. And if you want a more vivid look at the different parts in manga form, you can pick up the manga chapters at Amazon as well. The manga adds fluff to the things, like additional battles and more context, with the first volume of the Year One Manga collection coming soon.