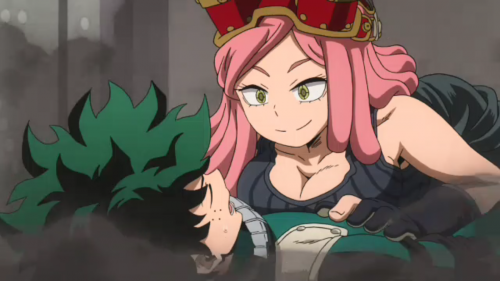 Here’s my (very late) Recap and Review of Episode 14 of Season 3 (or Episode 52 as a whole) of Boku no Hero Academia (My Hero Academia) .

The episode opens with Izuku remembering All Might’s vow as he wakes up to his new life in the dorm. The class will be focusing on getting their provisional license, which will allow them to act in emergencies, but the exam has a 50% passing rate. So, Eraserhead plans on having everyone come up with at least two ultimate moves before then and invite in the other teachers to help.

They change into their hero outfits and then learn more on the criteria for being a hero to pass the exams. Since being able to fight is a big thing, they need to have an ultimate move whether or not its an attack. Iida’s Recipro Burst or Kamui’s Lacquered Chain Prison are two examples since they allow them to act against opponents before they can do anything.

The training in the camp to improve their quirks were to prepare them for this, and they’ll be spending the next ten days working on it. He also tells them they should improve their costumes to ready themselves for it. Then they split into teaching.

Ectoplasm’s Quirk makes it so he can mentor them all at once, pointing out how predictable Ojiro’s movements were with his tail, how Mina could improve the speed, power, and distance of her acid spray by turning her hand into a nozzle, and having Momo create multiple things at once. Izuku, on the other hand, is struggling to come up with something since his quirk isn’t suitable, so right now he’s told to focus on developing his quirk.

All Might shows up to monitor the situation, since he’s fully dedicated to teaching now. He notes Izuku is struggling, while Bakugo is just destroying the  clones since he already has a couple of moves. He then goes around to give others advice with the aid of a self-help book, leaving Izuku to think about why he’s still imitating him.

After the training session, Izuku goes to the Development Studio to try and alter his costume to deal with the issues of his arms when who should pop up but Mei from the Festival. After a “bouncy” reintroduction, she gets into  the idea of helping him starting with feeling up his body to fit him into a power-suit that nearly breaks his spine and ending in giving Izuku the idea to  actually start using his legs if his arms aren’t working. So he asks Iida to teach him something before we get another training montage.

Then comes the final moments of the episode, where four days later we see some progress. Izuku has come up with his first Ultimate Move after changing up his costume a bit (with the exception of the base since his mother gave it to him.) and we see it get used when he saves All Might from nearly getting killed in his weakened state after Bakugo terrifyingly learns how to pierce solid stone and sends a piece flying. Shoot-Style is born from that moment, a style dedicated to kicking instead of punching.

So this was a great episode for development. Once more we got to see the teachers shine in their roles as educators by showcasing both knowledge and experience. Ectoplasm’s suggestions and advice was solid throughout the training, and I found their explanations on Ultimate Moves very understandable. We also got to learn about the system when it comes to costumes, and how you need both a licenses to tinker and to fill out an application for the company who made the outfit before the government approves the changes.

All Might has even stepped up his game to actually teach something. I can’t  tell you how rare it was to actually see him teach so far, and he didn’t focus on just Izuku either. He’s taken his dedication of teaching and raising the next generation of heroes since he lost the embers of his Quirk seriously.

And then we got Mei again, making me happy. She’s remained eccentric enough that she forgot all of their names, tried to slap Izuku into some powered-armor and then suggested walking on hands to Iida. But her dedication to her craft is not to be underestimated, nor what she brings to the table with her lack of fear of failure.

As for Shoot-style… it’s simple, yes. But you have to understand, this is a big step for Izuku since… well, he doesn’t know how to fight. Muscular pointed out Izuku telegraphs his moves too much, and Stain read him like a book during their first encounter. He never learned how to fight effectively since he’s been too busy trying to control One For All so he doesn’t splatter his opponents or break his bones.

Instead he always copied others in order to fight, from using Gran Torino and Bakugo’s movements to All Might’s attacks. So the fact that he decided to develop Shoot-Style is the first step into approaching things on his own rather copying for others. And he’ll only improve further from here.

Overall, it was a great episode and I can’t wait to see when we actually get to the license exam.