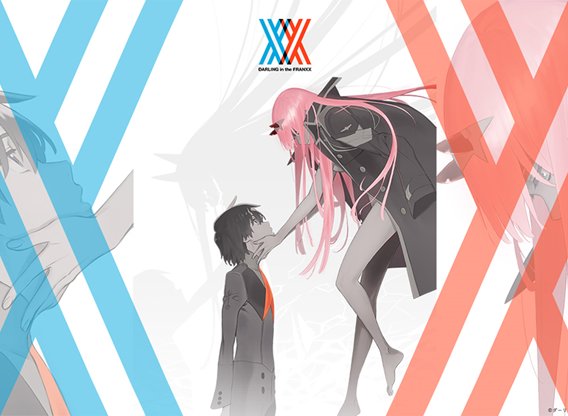 Darling in the Franxx is a 24-episode anime that aired in the Winter of 2018 until Summer of 2018, a collaboration project between Studio Trigger and A-1 Pictures.

This show has a lot of controversy to its name, and for good reason considering one of the first scenes shown is that the men pilot the robots by straddling women and grabbing handlebars that are attached to their butts. However, I was among one of the many who saw there was a deeper story attached and watched it for the plot, rather than the fanservice.

Then, much like Valvrave and Eureka AO, it screwed over my expectations around the end.  Though not as bad as those two, but we’ll get to that later in the review.

The premise of the story is in that in a post-apocalyptic world, humans have gained immortality through the use of a nebulous source of energy known as Magma Energy that they use to power everything. However, the use of this energy has awoken subterranean monsters known as Klaxosaurs, who have attacked the humans cities and forced them to reside in moving mobile cities called Plantations. To defend themselves they enlist the use Parasites, child soldiers who act as pilots for robots called Franxx.

Our protagonist, Hiro, is a formerly prodigal parasite who ends up being unable to pilot with anyone and plans to leave the Plantation when he stumbles across a pink-haired girl with red horns named Zero Two. She’s known as a legendary pistil whose partners die within three rides with her, so she’s searching for a partner who will last longer. Long story short, a Klaxosaur attacks and the two partner up, thus forming a partnership and relationship that will be tested as the story goes on.

Now, it needs to be said that despite the fact that this has a monster-of-the-week appearance, the show is actually about relationships, sexuality, and friendship as the parasites of the plantation try to overcome the indoctrination that they are born into. These children and the society they are in no longer reproduce, with the knowledge of sex and the concept of relationships has been intentionally buried. They are largely disposable in the end, taught that they exist only to sacrifice themselves for the greater good of the adults living down below in the city.

So, while the battles are decent, they aren’t the central part of the story’s premise.

The setting is a post-apocalyptic world, not unlike Chrome Shelled Regios, where the world outside of mobile and domed cities has been ruined. The people inside of them are left content due to the fact that they have all their needs provided for them, with the children being used as soldiers and are conditioned from birth to believe it to be their duty without fail to sacrifice themselves. They worship Papa, the one who runs every one of the plantation, as though he is a god, and his word is law.

It’s kind of like a horror show in that you know for a fact that this society is messed up but the people themselves don’t know it.  It’s disturbing and you kind of hope that they find some way to liberate themselves from the shackles that have been enforced upon them by the cult-like indoctrination they’ve been made to adhere to.

There’s a plethora of characters, but most of the focus is on the squad of Plantation 13. These kids start out as something special even before the series began, as they each have names and  unique Franxx, rather than simple code-names and the standard designs that are widespread with other squads.

The names are courtesy of our protagonist, Hiro. As mentioned before, he was a prodigy until an event in the past robbed him of his compatibility and he was on the verge of giving up until he ran into Zero Two, who he could pilot with. Early on, Hiro’s need to pilot in order to give his life purpose drives his attitude, so the fact that Zero Two gave him the ability to do so served as the reason for his affection and gratitude to her. However, after a later event we see more of the person he used to be and he becomes someone who has more agency and drive on his own accord.

Zero Two is, in stark contrast to the other parasites, someone who is rather free-spirited and assertive. She doesn’t have an ounce of the zeal for Papa that the other kids does and does what she wants, which brings the spark of individuality to the squad and eventually serves as the catalyst for them to develop into individuals who have value beyond serving Papa.  However, later on we learn she has a very tragic backstory and that her behavior stems from that fact, along with a deep-seated desire that she’s been told she can only obtain by killing Klaxosaurs despite the fact that she has their blood inside of her.

Then there’s Ichigo, the leader of the squad. She’s a fairly straightforward girl who has a crush on Hiro that isn’t fooling anyone, so naturally she’s not fond of Zero Two starting out. However, she does put the squad before her own personal feelings and then tries to welcome her into their group before the two have a serious falling out due to some bad decisions on both of their ends, but they patch things up around the second-half of the show.

Next is Goro, also known as best bro in the show. He’s been friends with Ichigo and Hiro since they were children and is in love with Ichigo,  so you’d think there would be jealousy  with Hiro because of it. But nope, he not only supports her, but he watches out for Hiro to the best of his ability and even tries to get them together despite the fact that Ichigo is his partner. The only times he truly gets pissed are when Hiro does something to risk his life needlessly without considering how the rest of them feels, and I understand where he’s coming from.

Next we have Mitsuru. He starts out as the most antagonistic person on the squad, showing disdain to Hiro and trying to prove himself better than him. He even goes so far as to try piloting with Zero Two to do so, showing complete disregard to the feelings of his current partner Ikuno, and was humbled by Zero Two deciding he needed to be put into his place.

After the incident with Zero Two, he slowly breaks down and we see why he ended up the way he did. He was someone who admired Hiro with an unmatched passion, so when Hiro suddenly changed and forgot a promise that served as the reason he agreed to undergo a life-threatening procedure, he turned spiteful and just plain mean. However, he eventually grows close to his second partner, Kokoro, and this changes his character into someone you can root for.

The rest of the squad are rather… I won’t say less developed, but compared to the others they’re not really that focused on and can be summarized pretty simply.

The characters are easily the strongest point of the story, and from start to finish this applies since we do see all the ones listed above grow over the course of the story.

The animation and sound are pretty good as far as anime goes for 2018. The characters were expressive in their emotions, with the exception of a few characters who actually had reasons for that being the case. The music was also enthralling, really capturing the moment where it was essential.

Overall, Darling in the Franxx was probably one of the most entertaining shows I’ve watched and I’d highly recommend it… right up until the final part of the story.

Without wishing to spoil, let’s say the story is basically on a highway going down a predictable road. You see and expect it, but you want to see the end result of these kids’ struggle… then aliens get involved and you’ve essentially swerved off the rails and down into a gorge where the car explodes.

I was not a fan of the surprise twist, as not only did it mean that humanity’s screw ups weren’t their own doing, but they had no agency at all. In doing so, I felt it invalidated a lot of the build up and my interest immediately dropped. More so considering a lot of the mech shows I’ve enjoyed have dropped the ball around the same place, which leaves me wondering if they aren’t just cursed to disappoint me in the end.

So, unfortunately, while I do recommend the first two-third of the show, I cannot really recommend continuing past Episode 19 and suggest you call it quits there.