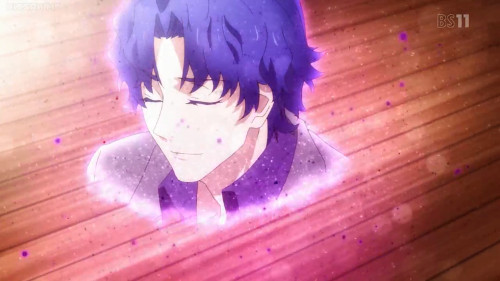 This is the most dignified death Shinji has ever gotten.

The third episode of Fate Extra: Last Encore has aired, and so I’ve come to give my review.

The episode opens with Red Saber fending off the Berserker-turned Servants until the one blows a hole through the barrier between her and her Master, who has defeated the women who’d stabbed him. She rushes to get him as Rin hacks the barrier that Shinji put into place, allowing  Saber to escape with him. So they hop on Rin’s hoverbike and take refuge at Tohsaka’s penthouse.

Hakuno wakes up to find things covering his wounds. These are Code Casts, which are basically spells in the digital world, meant to heal him. Rin then introduces herself to him as a Magus who lost her Servant. She gives Saber and Hakuno potions before forming an alliance with them since she wants to go to the next floor and needs help.

She also gives us an info-dump on how the Masters on this floor are cowards and that SE. RA. PH hasn’t been working since a big circle in the sky called the Chakravartin appeared and overwrote the rules of the Holy Grail war. The various  floors are separated from one another and Shinji, who won first after the Chakravartin took hold, became a Floor Master who stopped the war here. Since then the Masters who came from above or below  hit a dead end, with their Servants becoming something they sold or bought.

Rin’s trying to fix things since she believe Chakravartin is trying to destroy SE. RA. PH, so they need to get to the next floor first. However, a fight between Masters is the only way for the Ladder to ascend. You can fall down from one floor to another, but you have to fight in the war to go up and the other Masters have lost their Servants. That means they can only advance if Hakuno fights Shinji.

Hakuno outright states he’ll kill Shinji since he was the one who killed him. Then we we get various scenes of dead people who look like Hakuno, dead in various ways, before his memory flashes back to the when he gained Dead Face. Then comes morning and they then decide to go straight through the front door by setting a fire long enough to distract the harem police.

Shinji has his Berserker Servants stand in their way, which forces Rin to face the three alone while they head straight to the top. There they find a school building where the Masters who failed fall like snow from above and Shinji himself is waiting for them. Shinji calls them out on knowing nothing about how hard he struggled to put everything into place.

We get a brief glimpse of his first match, where he killed another Master and then flipped out at having to kill even more people after killing his friend, Hakuno. So when he became the only remaining Master on the Floor, he decided that rather than dying by fighting without accomplishing anything, he would build a city for the Masters who didn’t want to keep fighting. His Servant, the pink-haired woman we saw last episode, tells him that she’ll follow his wishes if that’s what he wants, leading to the creation of the city we see today.

Then we cut to the current battle, with Shinji raising the walls of the city to flood it with water as the battle begins. Rin manages to come out unscathed from her red super-mode but mentions that they can’t come back to this floor anymore as Shinji’s Servant appears in a Pirate Ship with floating cannons. She then calls out a bunch of ghost ships under the name Wild Hunt that blast Saber out of the air, into the waters below.

Unfortunately for her, Red Saber figures out her identity because of it and then attempts to activates one of her abilities, Imperial Privilege, to raise one of the ships. However, she lacks the mana to do so until Hakuno swims down to give her a mana-transfer kiss that she likes more than she should. Refreshed, she jumps out of the water and declares the match finished to her enemy, Francis Drake.

Francis feels her blood racing as the battle commences once more, but that ship she raised crashes into Francis’ and it’s revealed that Imperial Privilege allows her to steal the ability of an enemy if they’re still standing. That allows Red Saber to close the distance and finish her off with a single slash since Rider apparently ran out of ammo. So, the battle is all but won for them as Rider lay dying.

Shinji opts not to cut his contract with Rider, meaning he’d die with her, since he feels that if he does run then everything he’d done will be seen as meaningless. Before he can give us a more heartwarming speech, Hakuno tells him that his reasoning doesn’t matter now. But he does admit at least he won’t hate him anymore before Shinji and Rider both disappear with a smile on their faces.

The episode then ends with them looking over the ruins that represent the real first floor, citing that everything they’d seen before was brought into existence by Shinji until the elevator descends. They get on it as Rin races for it on her hoverbike, telling them to wait for her.

So… the third episode is… okay. It moved the plot along, presented us with more reasoning for Shinji doing everything he’s doing, and given us a look at why things here have changed more than they really should have. But that final battle was horrible.

Rider dying because her ammo ran out is rather lame since we knew Saber was going to win one way or another. I get that she was out of practice, but really that’s underwhelming. They also have a decent bond with one another, but we don’t see how that came about so the relationship feels rather shallow.

On another note though, apparently neither Shinji nor Rin remember Hakuno. That means one of two things to me. The first is that Hakuno doesn’t appear to them as he does to us, instead looking like someone entirely different.  The second is that, given the mind-screw going on and those images him him dying over and over, I’m thinking that maybe this is a different timeline or something now.

I’m not as enthusiastic about this episode as the other two, but next episode will maybe be better.