In the world of One Piece there are people who can do amazing things through various methods. One of these is the ability to manipulate the weather through the use of use of a tool called the Clima-Tact, wielded by Nami of the Straw Hat pirates. I find this fascinating since her ability was obtained through the power of science that can be related to real world science, which means that we should be able to understand how the device functions. So, in this multi-part entry of Dissecting Anime Science, I’ll try to figure out how the darn thing works.

Three things to keep note of:

1.) I’m not a scientist. I just find some things fascinating enough that I want to dissect them and try to puzzle out how they might function in reality. So don’t take everything I say as hard science, because I’m really just trying to do the best I can to make sense of it for the readers out there.

2.) One Piece has elements and compounds and all sorts of things that factor into its world that may not be available in the real world. Such as pyrobloin, which makes up the Sea Clouds and Seastone.

3.) I’m primarily going to be focusing on the initial version of the Clima-Tact. The later versions are too complicated to look into without solid enough grounding on this one. 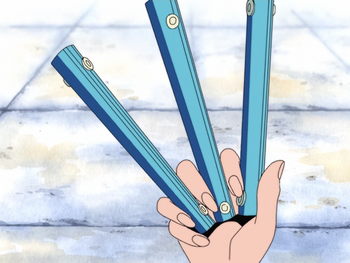 The Clima-Tact was originally a three-sections staff made by Usopp after Nami requested he do so, since they couldn’t keep up with the stronger members of the group. He gave Nami the finished product around the time they reached the capital of Alabasta. Unfortunately, due to a miscommunication, Usopp made it something that was better-suited for party tricks and it was only because of Nami’s intellect that she managed to turn it into one of the most destructive implements in the series.

Now, each of the three sections of the staff were called “poles” and could release “balls” whenever one end was blown into, or they were moved in a way that forced air through them, such as by spinning them. The “Heat Pole” released a “Heat Ball,” the “Cool Pole” released a “Cool Ball”, and the “Electric Pole” released an “Electric Ball.” The balls themselves have little combat value in this iteration but their effects radiate out and affect the world around them, which is why they could change the local weather. So, the key to understanding how the Clima-Tact can be done by determining exactly what these Weather Balls are formed of.

Now, while they’re called “balls” in the English translation, they’re known as “bubbles” in the Japanese. Bubbles are formed when a thin film traps air within the center of it, keeping it separate from the outside atmosphere. The reason they take on a spherical shape because it puts the least amount of stress on the surface and keeps the bubble from ripping itself apart.

One Piece has shown multiple times that they have access to bubbles that vary in how durable they are. The bubbles made by the mangroves of Sabaody Archipelago are resistant enough to go all the way to Merman Island, the ones made by the Bubbly Coral of said island are are pretty durable as well. And Weatheria manages to grow their own Weather Balls that can contain clouds within them. 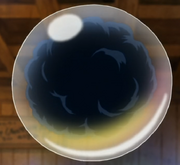 However, most of these unique bubbles are found near the end of Paradise in the Grand Line, so how did Usopp manage to create bubbles that heated, cooled, or electrified the air within it when they were relatively early in their journey?

I can only assume he used some kind of special bubble solution that makes the bubble itself resistant against whatever temperature changes it undergoes. He does have a knack for inventing, and he has shown himself to be capable of making his own ammunition with his slingshots. Since they didn’t have much, if any offensive combat on ability on their own, we can make the presumption that he probably learned how to make these specific bubbles during the time he spent with Kaya and the kids back on his Syrup Island to entertain them.

Let’s presume that the ends of the poles are where the bubble solution is stored. If that’s the case then there’ probably a ring at the neck of each end so that air can be coated to come out either way, and behind them is a secondary ring or something that prevents the formation of the bubbles, so they don’t form on the interior and jam it up. That would make it so that the exit holes are the only places where the bubbles come from.

The bubbles in the initial version are rather lumpy and inelegant in terms of shape. While the version that follows the inclusion of Dial Technology is a little more refined, after the visit to Weatheria the bubbles are instead referred to as “Eggs” and gain a more spherical and refined shape. They also lack the central glow in the center of the bubble prevalent in the previous versions, showing a marked improvement in the potency and development of the Clima-Tact.

The biggest issue to figure out here now is how the bubble solution change the air that flows into them. With reference to this lovely reddit post, it’s possible that the bubble solution itself is mixed with either endothermic, exothermic, or ionized substances. These substances would have to be something that doesn’t have an instant chemical reaction with the bubble solution or air since then the poles would be damaged or the bubbles would improperly form. If that’s case, then there’s also probably a storage component in the center of each pole that contains a catalyst.

A catalyst is something that speeds up or enables a particular chemical reaction by lowering the activation cost. In this case, it essentially acts as trigger that breaks down the barrier between the bubble solution and the mixed in substance. That allows the different properties that compose the bubbles—heated, cooled, and electrified—to manifest.

Now, it’s a stretch to assume one catalyst can make this all possible. However, as mentioned before, One Piece has such things in the setting. We know for a fact that such catalysts exist because one was featured prominently in the Alabasta arc: Dance Powder. 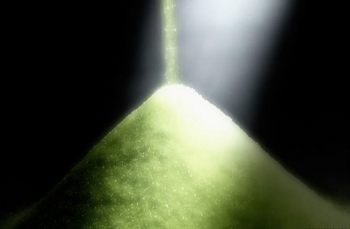 Dance Powder is known to be able to create rain when burned because the flames cause a chemical reaction, likely breaking down the chemical bonds into a transition state by serving as the activation energy. Those molecules then create new bonds that ride the resulting water vapor into the air, where it quickly cools to sub-freezing temperatures away from the fire. That causes the formation of ice-crystals within the air and makes clouds that snow, which melts into rain as it passes through a layer of warmer air and falls to the ground.

So think of it this way: when the air is forced inside the pole it passes through a storage component in the center of the hollow interior that mixes the air with the catalyst. That mixture is then carried into the bubble solution layering the wand at the end and a bubble is formed. The air trapped within the bubble undergoes a chemical reaction until the energy cost needed for the catalyst to remain active becomes too high, at which point the bubble will pop or dissipate.

Taking the above into consideration, we’ll try to dissect the three different bubbles a little more in the next entry before getting into the different weather formations that Nami can create with them.