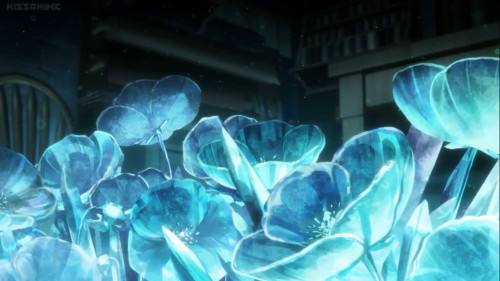 Seriously, did they kidnap members of Studio Ghibli?

The second episode of  Mahou Tsukai No Yome  (The Ancient Magus’ Bride:)  has aired and I, once again, will bring you the recap and review of the episode as we dive into Chise’s new life with Elias after learning that she was to be his bride.  Now, onto the episode recap.

We open to the sight of a woman with long, red hair saying that she should have never given birth to someone before cutting to Chise as she flies from Japan to London with the guy from the last episode who had sold her on the auction. The fact that its a flashback is made more evident when Chise wakes on her bed to the light of a new day and finds her arm bandaged.

She’s then escorted by Silky to Elias, who formerly introduces her as a fae that handles the housekeeping in general. We then get another display of magic as Elias turns a letter into a bird that flies off to an acquaintance of his. He then drops the bombshell on us that Chise had been asleep for two days after what happened in the forest.

Elias then takes her into the city after disguising himself as a human to introduce her to another acquaintance , a mage (and mother) who handles magical crafts named Angelica Burley. After decking him for his lack of tact in the last episode, she explains the difference between magic and sorcery. To sum it up, Sorcery is basically Nasuverse Magecraft where they hack reality under their own power, while Magic is using spirits and fairies to bend reality and perform miracles. The latter can do things the former can’t, but if they overreach then they pay a very large price from it.

Then she calls out her Familiar, a vodyanoy water spirit named Hugo, to give Chise a chance to experience using magic. It proves to be a little more than either of them expected, given that the moment Chise gets into it she manages to cover a good portion of the room in crystal flowers before Elias stops her. The tone and music shifts for a moment as Angelica questions what Chise is and then gets angry when Elias deigned not to tell her ahead of time that she was a Sleigh Beggy, indicating a difference between them and regular mages or sorcerers.

On the way back, Elias asks Chise about why she made poppies out of the flowers, leading into some information her family life. She reveals that her father ditched her and her mother. So her mother took care of her, even taking her to a flower garden for sometime when she was younger, but died in front of her eyes afterwards.

When they get back, they find that a man is waiting outside for Elias. His name is Simon Cullum, and he’s the priest of the village’s church. He gives Elias three assignments from his higher-ups as a penalty for suddenly taking on an apprentice and then departs with medicine that Elias made. He explains that it’s for the people in of the village and tells Chise to study well under him since she has the potential to do great things.

Elias then takes Chise with him to Iceland to handle one of those requests, checking up on the dragons there. Naturally, Chise is kidnapped by one of them and carried off abruptly as the episode ends.

So this episode expands where the first one left off by introducing a few supporting characters and gives us some world-building, before ending with a cliffhanger that’s a bit more action-packed than the last.

The first supporting character who is given some explanation is Silky, the quiet girl who was dressed as a maid before in the last episode. She’s a neighbor (fae) that apparently acts as the landlord and groundskeeper of the place where Elias lives. She doesn’t say much, but there’s a personality there considering how she reacted to Simon.

The second supporting character is Angelica. Now, we’re given a brief glimpse of her in the first OVA, but here we learn far more. She’s not only someone who makes tools that run off magic, but a mother and sassy woman who does have Chise’s best interests in heart at a glance. She acknowledges herself that mages are a dying breed and would prefer her daughter take up a normal job, but at the same time you can tell that she does like what she’s doing.

The third supporting character is Simon, the priest of the local village’s church. He’s rather polite and, despite Elias and Silky not really liking him, he has some level of respect for Elias and is grateful for the medicine made through magic. He also gives us another piece of information, citing that not only has Elias been living and active on that land for decades without doing anything, but mages live extremely longer lives.

Elias’ dry humor continues to amuse, but the ability to disguise his face with magic explains a little more on how he gets around without drawing too much attention to himself. His interaction with both Angelica and Simon were a thing of beauty too. You can see that both have known him for a long time, taking jabs at him with the comedic art style playing it up as humor between peers.

We also learn more about Chise, such as her mother. It’s hard to believe that the same person who held her close and took her to a flower field was the same person in the opening dream that said she should never be born, so naturally we have to deduce that something happened to lead up to that and her death. No idea what happened to her father though.

The art remained excellent as before, with the crystal flowers and Hugo’s summoning animation being amazing. I’m really starting to think they pulled a Made in Abyss and jacked one of the Ghibli team for the project, probably keeping them locked in a room to crank out excellent art. Either way, it’s great.

Next episode looks like we’ll get to see the Dragon’s Homeland and Chise will have a touching moment with one of them, so let’s look forward to that.