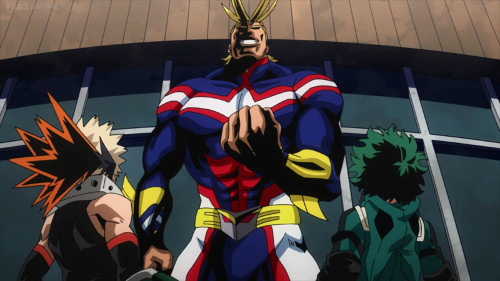 Episode 21 of Season 2 (or Episode 34 as a whole) of Boku no Hero Academia (My Hero Academia)  has come out and it begins the last arc of the Season, the Final Exams. Of course, it starts with a television interview between veteran hero Midnight and Mt. Lady on the exposure of skin in costume that devolves into fighting, much to Mineta’s delight.

Then we get insight into what the Final Exams will entail from Eraserhead and see the students reaction. The ones who you’d expect to be in the top-tier during the written portion (minus Bakugo) try to comfort the less intelligent ones, with Yaoyorozu offering to help them study and being elated at the thought of holding a study party at her home. It’s the practical exams that worry them, since they don’t know what it will entail.

Then that Copy-jerk from Class 1-B starts messing with them until Itsuka comes in and knocks him out. She tries to help them by telling them that the exam would be against Combat Robots based on what an upperclassman told her. That brings some measure of peace to the kids in Class 1-A, but Bakugo wants to use it as a chance to prove he’s better than both Izuku and Todoroki in terms of score.

Then everyone studies and takes their written exams over the course of three days and they find that the practical exam will be a battle between the student and teachers, two-on-one. Todoroki and Yaoyozoru draw the short-straw and have to face off against Eraserhead, but at least they’re  not Bakugo and Izuku who have to go against All Might.

We then get a look back to the teachers when they decided to change up the practical exams. Robots just wouldn’t be appropriate given the level of threat the League of Villains present, so they intend to use the training to make the students stronger. If the students escape from the stage or capture the teachers (who have nerfed themselves with weights) in 30-minutes, they’ll pass.

The exams are taking place one after another, so Izuku goes to observe the matches that are already being undergone so he’ll be prepared for his own. Kirishima and Sato go against Cementoss, who controls concrete, and they bust through his walls with sheer power. However, Izuku correctly predicts they’ll run out of stamina before he does and his prediction comes true.

The episode then ends as Tokoyami and Tsuyu face off against their teacher who can create clones of himself.

So, loved the initial world-building that came from the beginning of the story. Midnight’s costume led to the creation of an entire bill being passed, which is actually somewhat obstructive as she has stated since many different quirks (like hers) require different levels of exposure. Keeping in character, Mt. Lady tries to steal the spotlight by pointing out Midnight’s outfit and age, and Mineta continued to enjoy himself watching the catfight and later acting smug at being 9th in class.

We got to see Class 1-B again, with the guy who has Copy-powers trying to pick a fight with Class 1-A again and Itsuka basically keeping him in check. This defines their personalities as well, given that the former constantly tries to lord whatever advantage he can over Izuku’s class and gets reprimanded by Itsuka, who is the reasonable one.

It also serves to give more characterization to the less pronounced members of Class 1-A. Kaminari and Mina, for example, have trouble using their quirks against living targets with how dangerous they are (electricity and acid respectively). Yaoyarozu greatly appreciated being able to help her classmates study, to where it made her completely adorable, but Eraserhead points out that she lacks the ability to make spur of the moment decisions.

Bakugo is still completely abrasive, but he takes time out to help Kirishima study. Considering how hostile he was to his other classmates, this and the partnership they had in the cavalry battle helps showcase a budding friendship between them. However, he still gets along badly with Izuku and that’s a problem, so they get paired up to work through that.

The exams are also well-thought out in who goes against who, designed to test their limits in both mind and body. I look forward to watching how they play out.