Koe no Katachi (A Silent Voice) is a movie based off  the similarly named manga series that I discovered a month ago due to word of mouth and fell in love it. It’s a slice-of-life story, one of the few I’ve enjoyed without supernatural elements, and basically follows a small cast of characters with the central pair being a teenage boy and girl. It’s… hard to place it as a romance, despite the elements being there, but it mostly covers the themes of bullying, depression, disability, and friendship.

Fair warning, there will be spoilers from here on out, but I generally recommend it so if that’s what you’re here for now you know.

The premise of the story begins with our protagonist, Shoya Ishida, ripping his calendar in half before going out to quit his part-time job, sell his belongings, and withdraw all his money from the bank before leaving it next to his slumbering mother. The reasoning for this becomes obvious as he goes to a bridge and stands on the ledge in preparation for tomorrow. That’s right, he intends to commit suicide the very next day.

What stops him is his encounter with  Shoko Nishimiya, a deaf girl he bullied to the point of dropping out and was in turn bullied and isolated for several years as a result. Her forgiveness basically stops him from killing himself and leads to the rest of the story that explores friendships, romance, and making up for past mistakes. But these things do not go smoothly as his attempts to make amends are hindered by various obstacles, including former friends and their own misunderstandings. 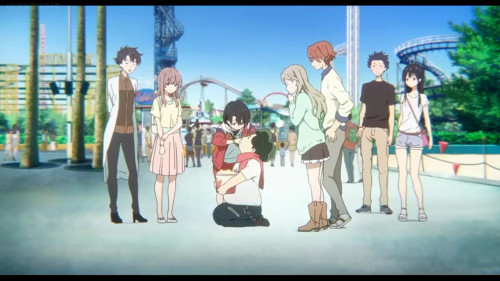 The cast is fairly decent-sized, but only a handful really draw attention and will be the focus of this section.

Shoya, being our lead, is introduced as his teenage self after we see him in the midst of suffering from the consequences of his bullying, which is then shown. He’s basically a brat who really only grows out of his bullying phase once he sees his single mother having to pay back the cost of the hearing aids he tore out, with the bullying by his former friends only making things worse to where he eventually sees everyone other than those he can humanize with an “X” over their face, showing his isolation.

It’s only when he’s able to put himself out there after meeting with Shoko again that he starts to be able to see the faces of others who he’d come to know and respect. That gets screwed over halfway through the story, but he manages to get back into by the end. Overall, I hate his child-self but empathize with his teen-self because he has learned from his mistakes and is seeking to make amends, so there’s no need for him to suffer anymore.

Shoko, our female lead, is a nice girl who was born deaf and tried her best to be friendly to her classmates despite everything, only to be pushed around for it until she finally couldn’t take it anymore. Shoko was born with disability, something that she has had to contend with all her life, and loathes herself to an extent because of the burden it puts on others.  Eventually, she grows to like Shoya but can’t even tell him with her own words and the rest of his friends seemingly abandon him after learning of his past.

She blames herself and tries to commit suicide shortly after her mother’s birthday, thinking that it would fix itself if she did. It’s really tragic that she was driven to that point, and her dream sequence afterwards fleshes out that she really just wanted to be normal. Thankfully this isn’t a tragedy and she gets better.

Yuzuru is Shoko’s tomboyish sister who dislikes Shoya for obvious reasons, what with the bullying and all. But she warms up to him later on, after spending a night at his place. She has a strained relationship with her mother, but cares about her sister and grandmother greatly, and thus the death of the latter and near-suicide of the former hit her the hardest.

Shoya’s mother was patient with her son, apologizing for his mistakes and caring for him despite his actions. She puts up with a lot, but its because she’s so nurturing that Shoya feels the full weight of his actions. That’s also why she was pissed off he tried to kill himself and made him swear not to.

Shoko’s mother was far less forgiving, rightfully so considering the fact that her daughter was being bullied for a handicap by him. But as the film later shows, she has had a hard time and had to be strong raising her children alone with only her grandmother. Once Shoya helps with her birthday and saves Shoko’s life, she ends up really warming up to him.

Now onto the minor characters.

Nagatsuka becomes Shoya’s friend after he helps him out and latches onto him rather quickly, which basically sends the message that he was starved for friendship. That being said, he’s rather needed as he serves as the first person other than Shoko to help him come out of his shell. I liked him.

Mashiba and Sahara are also more decent, but the latter basically only appears when its relevant to Shouko and Ueno, while the former doesn’t really have much to contribute due to some of the changes from the manga. The two guys who were childhood friends with Shoya barely pop up at all, although they are the ones who pull him out of the water near the end.

The former basically blames Shoko for their friendship breaking up when she and the others threw Shoya under the bus after the bullying. However, Ueno’s actions are at least understandable, namely that she saw Shoko basically putting on a false face and tried to drive her off, and still doesn’t like her. It’s basically her being a bitch because she doesn’t feel the need to censor herself or change.

Kawai though, she’s by far the worst of the bunch. She likes to play cute and innocent despite being just as bad as Ueno, and she’ll basically do whatever she can to make herself look like an angel while screwing over someone else. She’s basically a manipulative bitch, right up to the end.

The animation is gorgeous. I mean, I’ve covered some pretty anime here and there, but the quality of the animation here is really stunning. It’s one of the most beautiful animated movies I’ve seen and the characters have so much expression and movement that it adds a lively quality to each one of them.

As for the music, it fits damn good. I got chills listening when Shoya was watching Shoko on her balcony and realizing what was happening, before calling out for her. And the track when they both wake up to go to the bridge to see one another is just… amazing.

Being a movie, rather than an anime series, they have to try and compress everything into a narrow time frame of two hours and ten or so minutes. Because of that, they have to fast-forward through a lot of events, change some of the scenes, and missing out on some of the character development to be found in the series.

However, it hit on the highlights. It showed how difficult it is for someone who had a disability to fit into school (and society in general), especially with kids who don’t properly understand the context of empathy. They do some horrible things to her, things that make you want the little brats to suffer. But only Shoya suffers as they throw him under the bus to save themselves, and he gets several years to learn what its like to be on the other end of bullying by those he once considered friends.

Shoya honestly deserved the lesson in humility it provided. However, the fact that his friends basically absolved themselves of their own responsibility to get out of trouble and then continued tormenting him does not make it okay. Especially at the last half.

That begin said, if you can watch it go and do so. It’s a masterpiece and deserves the praise it gets.

Edit: And I’ve just received word it beat our Your Name for animation award. So yeah, it’s good.

One thought on “Koe no Katachi (A Silent Voice) Movie Review”