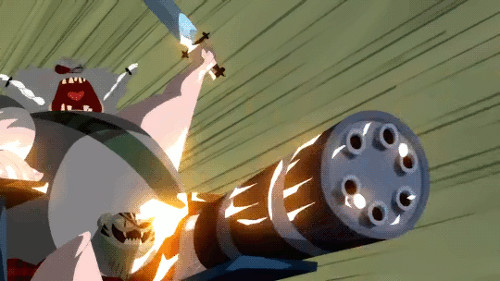 Old age didn’t slow him down in the slightest.

The fifth episode is out and in this episode, we take a brief break from Jack and Ashi’s adventure to check in on Aku, whose tower is under siege by a military force led by the Scotsman. For those who don’t know, he was an badass ally of Jack with a magic sword and machine-gun leg in the past. And, even wheelchair bound and in his prime age, he leads a military strike against him along with his family—and by family, I mean like dozens of daughters.

Aku wastes no time in driving them off, leaving the Scotsman to behind to distract him. Initially, Aku just brushes him off. But then he brings up Jack and Aku uses his lasers to incinerate him. His body is destroyed, but because of Celtic magic his ghost lingers and he tells his daughters to find Jack so they can fight again another day.

With Jack, he and Ashi are still stuck on the island. Ashi suffers the same kind of mental problems that Jack does by envisioning her mother chiding her for not killing Jack. The hallucination ends as Jack dives into the water and tames a freaking water dragon to help them get back to shore. He then intends to leave her behind, but she sticks around because she wants him to show her the truth.

Jack refuses initially because he thinks she’s too blinded by Aku’s hate, but when she challenges him he decides to try and help her. He tells her about how the stars were formed in the sky one night, and the next day he shows her how nature has been ruined by Aku.

He then takes her to a city where they steal clothes and go visit a place where Aku recruit criminals banished from their world. After that, he shows her another sight and it breaks her of the lies of her mother. She wants to do something, but Jack feels its hopeless until they come across an injured alien who recognized Jack and begs him to save the children from a factory.

Unfortunately, the children are turned into raging berserkers who chase after the two of them. Ashi can hear a sound that is acting as the source and so Jack sends her to destroy it while he distracts them. Despite Ashi’s training, she ends up getting caught and tortured while Jack is cornered and nearly torn apart.

It looks grim for the both of them until the dumbass bounty-hunter reveals that he specifically targeted children and implanted a chip into them because he knew that Jack wouldn’t hurt an innocent. Rage becomes her strength, and Ashi breaks free despite the electric torture and beats the hell out of the assassin.

Unfortunately, the children seemingly die as a result and Jack gives into his despair. He willingly follows the ghost shogun to what we presume is his death as Ashi returns and finds the children alive. The episode ends with her calling out for him, with the preview revealing that she has decided to go searching for him.

So this episode initially left me fearing that they brought back the Scotsman only to kill him in six minutes. But then he resurrected himself and set up a future plotline, while the rest focused on Ashi’s redemption. I have to admit, I expected her to take longer to reform, but she got over her mother’s conditioning damn fast.

Then again, there are only so many episodes and I appreciate the streamlining of it. Here’s hoping she can save Jack from himself. Also, the fact that she could fear a frequency that Jack couldn’t means that her age is around less than 21 at the very most, akin to how only people that young can hear the buzzing of mosquitoes.