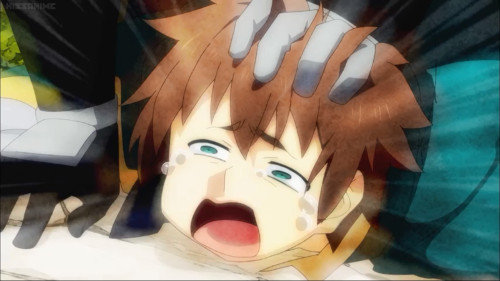 Kazuma’s life in a nutshell.

Kono Subarashii Sekai ni Shukufu wo! (God’s blessing upon this wonderful world!) or Konosuba for short, is a light novel-based anime that aired last year around this time and became something of an hit for the comedy it provided and the take on a ‘”trapped in another world” genre that no one really expected. In fact, the popularity was so great that it got a second season announced on the final episode despite being stiffed in length.

Episode 1 of Season 2 picks up where the final episode of the last season ended, namely with our protagonist, Kazuma, being arrested because, in his effort to protect the city against the giant spider-tank, he had the core teleported and it happened to land on the mansion of a local lord and he’s being pegged as either a terrorist or a servant of the Devil King. His allies try coming to his help, but end up damning him by calling out… and then throwing him under the bus to save themselves—except for Wiz, but Aqua stops that.

Still, Aqua comes up with a stupid plan to try and free him only for it to predictably backfire. Twice. And the resulting lie detection test not only serves to expose the ugly side of his personality, but it pretty much screws him when he can’t explain that he doesn’t have a connection to the Devil King because one of his skills came from Wiz, who does.

This pretty much condemns to the executioner’s block and he ends up vomiting in fear. Witnesses are then called up and it ends up condemning him even more because of his constant stripping of women in public, Aqua and Megumin destroying things with their strongest spells, and using Drain Touch, which is an undead skill that he shouldn’t know. So he’s pretty much boned until the Lord Aldarp gives him an opening he can exploit which allowed him to deny the claims directly.

However, he’s not that lucky as Aldarp decides to screw him over by directly having the judge condemn him to death anyway until Darkness steps up. It turns out that her family is quite powerful and has ties to the King, so while she can’t stop it completely she offers to owe a favor to Aldarp for staying the trial and the fat bastard takes it with the full intention of using it for perverted reasons.

So Kazuma’s life has been spared for the time being… after they repossessed everything in his mansion, resetting him and his team back to being poor.

…I’ve missed Konosuba from the depths of my heart. I love everything from the comedy to the derpy animation. Really, it’s like the opposite of Re-Zero in that the selling point isn’t the overbearing trials Subaru face but how funny the screw-ups are for Kazuma and how he barely worms his way out of it.

And the question of whether or not Aqua wears underpants has been definitely solved, so I can’t wait to see what the rest of the season holds for us.