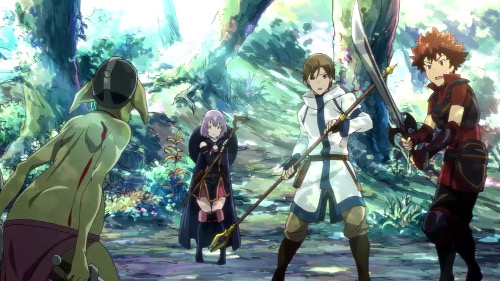 It should go without saying that “trapped-in-another-world” anime are pretty common these days. Most of them tend to focus on the protagonist becoming either the savior of the world or some awesome badass gifted by the gods with a unique power. It makes sense, given that they were pulled into this world for some reason, but it tends to become easily predictable and formulaic.

Hai to Gensou no Grimgar (Grimgar of Fantasy and Ash), which aired in January of 2016, is different in that it follows the ordinary young men and women that end up trapped in their world, without the skills or anything special going for them (in the beginning at least). The grounded setting that follows their daily life as they work to make a living has made it one of my favorite anime this year, and thus I intend to give my review here in the hope that someone who has not seen this anime will give it a good look.

The foundation of the story is your stock and standard “trapped-in-another-world” plot that, as I have mentioned before, is all too common.  However, in this case the time-tested foundation is used to build a rather solid and intriguing story that explores how ordinary people would slowly adapt to their setting by showing us just how glamorous that sort of life is if you only have ten silvers to your name, a week of training under a guild, and no way to return home, in a more cynical setting without getting too grim-dark.

In the first place, our heroes are not adventurers, despite doing what you’d expect an adventurer to do in a video-game or similar setting. They are volunteer soldiers that work out of a small city near what could be considered enemy territory, taken by inhuman creatures that have near sapient-level intelligence. It’s established very early on that such a prospect is not a question of morals, but the desire to live, and has emotional stakes with a real chance of death. And there are no revive spells…

The setting is fairly firmly set in a fantasy world, it’s even in the name of the show. However, unlike most shows of this nature, it does a fantastic job of establishing early on that life is rather hard for those that live in it. The people aren’t exactly friendly and virtually everything costs money, meaning that if you want to live you have to work. Newcomers like our protagonists have only one real career option if they want to afford to live, which is to become volunteer soldiers that go out and kill other creatures for a living.

The monster, like Goblins and Kobolds, have their own communities, behaviors, and mannerisms. The Goblins are set up primarily in a old, broken down city and do things like play chess and sit around a fire telling one another stories. While they are the easiest monsters to kill, that doesn’t mean they’re easy to deal with when they set up strategies like shooting the Healer in the back, recognizing and disturbing spell-casting, and setting up trap. The Kobolds have essentially turned a mine into a settlement, creating farming grounds, raising livestock, and smelting metal.

I personally loved the setting and will remember it fondly for years to come.

And now we get to the characters, the meat of it. We follow a group of young men and women arriving into this world with nothing but the clothes on their back.  They are Haruhiro (Thief), Manato (Healer), Moguzo (Warrior), Ranta (Dark Knight), Shihoru (Mage), Yume (Archer), and Mary (Healer).

The main viewpoint character is Haruhiro, the group’s Scout. He initially just does what he’s supposed to, leaving the commanding of the party to their group’s leader and vanguard, Manato. Then things go poorly and he is made in charge, forcing him to become a leader and leave behind the person he was to better accommodate his grieving teammates. He gains the most character development, steadily becoming more competent in both battle and working with his teammates.

The other characters also undergo some character development as well, but it’s not as obvious, with the exception of their second Healer, Mary. While this is what I’d call a flaw normally, there were only a single cour’s worth of episodes and they didn’t have time to fully flesh them out. They all become increasingly more competent as time goes on, learning from their mistakes, adapting to the necessity of killing to earn a living for themselves, grieving over the loss of people close to them in different ways, and so on.

The characters are unabashedly human in how they behave. They’re not just archetypes that spout out heroic lines and do things for the sake of justice. They do what they have to in order to live, while sharing different opinions on it.

Ranta, for example, comes to accept that there is no meaning in treating the dead with respect since everyone is equal in death and in a “me or them” situation he’d always put himself first. Yeah, it makes him a jerk, but he’s honest about it and doesn’t cover it up in the slightest. He’ll do what he has to and enjoy life while he can.

Haruhiro, on the other hand, looks out for the group as a whole and takes into account what needs to be done to best suit everyone. He puts the others first because the loss of any of them on his watch would simply be too hard for him to bear in the end. Thus he’ll be the one who makes the necessary sacrifice to get the others out.

The show is… well, pretty for the most part. The animation is fluid, watercolor backgrounds, the fight scenes are done quite well when they don’t just show a still of the characters performing a technique and giving a lecture on it in the narration, and you can feel just how clumsy they are at first. There are some scenes that could be better, but it’s nothing horrible.

The music carries the tone of the show, a somber tune during the depressing moment and a placid tone during their valued downtime. The opening itself has a rather out-of-place upbeat tone given what happens in the show, but it’s still pretty nice.

Overall, Grimgar is a Fantasy anime that has many things that I love. It is a story with a rather simple and narrow plot, people who land in a new world and adapt to it over the course of a few months. The wheels that turn the world, overarching debates on morals, and grand battles are left out of the equations to give it a more grounded exploration of these characters and the immediate setting they live in, but doesn’t shy away from the very real, very human consequences of their mistakes and actions.

If you’ve got a free day, go out and watch it where you can.