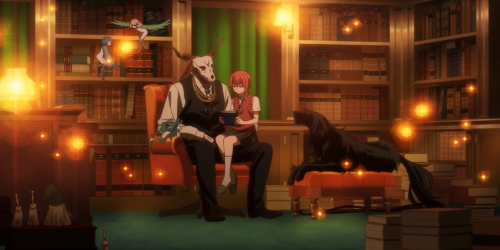 Mahou Tsukai No Yome (The Ancient Magus’ Bride) is a story about a young woman named Chise Hatori, who has been able to see things no one else could since she was a little girl. She has been plagued by trouble and bad luck, eventually leading up to her being sold on an auction of some kind that caters to the supernatural. She is picked up by Elias Ainsworth, an inhuman magus that seeks to take her on as his apprentice and eventual bride, and whisked away to a new life.

The success of the manga series has led to the creation of a 3-part OVA prequel,  Hoshi Matsu Hito (Those Awaiting A Star), the first part of which I will be reviewing.

The premise of the story, or the foundation which it is built upon, is to tell us how Chise eventually ended up in Elias’ care during the beginning of the manga series. However, because the story starts at some undefined point after that, to tie it into the source materials, it has to be framed in a way that sounds both natural and fitting for the setting. So, in order to allow us to get a feel for the characters, it’s framed through the medium of a story told to Elias by Chise upon finding a book she receives from Angelica Barlei, the woman we see at the beginning of the story.

One of the benefits of this method is that we get to see how Chise is doing in the present, including her living arrangements and her close associates, and can thus show how big the contrast is to how she used to be. However, it does feel like you’re jumping into the middle of something and will possibly blindside you unless you’ve read the source materials. Then again, considering this was supposed to be shipped with the manga volume, it’s not really meant to be viewed without  being familiar with the series already.

The setting, as far as we can tell, is set in the modern time-period. Magical creatures, magus, and other otherworldly things exist alongside buildings, cities, and the usual trappings of society. We see from how Chise reacts but others don’t to the presence of certain beings that only a handful of people are able to perceive the supernatural, thus there is some form of “masquerade” going on with the two sides being separated by perception. I’m tempted to call it an Urban Fantasy story for this reason, but we’ll just stick to the Supernatural genre for the time being.

Overall, it’s not exactly an original setting, but these days nothing is and I’d be a liar if I didn’t say that its my favorite kind of setting to begin with.

The characters of the story are somewhat hamstrung by the premise, namely that Chise is the primary protagonist while everyone else is basically a secondary character. Because of this, it’s… relatively hard to get a strong feel for the other characters. We know that the people close to her have something of a family vibe, but they don’t explain why Ruth can transform from dog-to-human, why Silky is quiet, what Elias is, or even how well Angelica knows Chise to give her a gift on top of everything else that she has to deliver to her.

However, we do get to know a relatively decent amount about Chise thanks to how the story is framed in the present and then the past. Because it starts ahead, we see that Chise has become a relatively normal and eager apprentice to Elias and that she’s somewhat comfortable around the supernatural. Compare that to when the flashback begins and we see that she has obviously gone through a lot to get to that point.

She’s lost family, was adopted into another one that couldn’t understand what she was going through and misconstrued her actions, and was constantly on-edge. From her eyes alone we could see that she was afraid to sleep, and because of how she was constantly harassed by invisible monsters, no one could really understand or get close to her.

One of the benefits of being an OVA is that the animation has time to be done well, which is evident in the gorgeous scenes throughout the video, and the animation quite pleasing to the eyes, with no major hiccups that you’d find in some longer-running series.

As for the music, I’m not an expert but even I can tell that it fit splendidly.  The tune when Angelica and Hugo were casting a spell at the beginning of the video, the placid music when they were having breakfast, and when the storytelling begins fit the themes of magic and family that they want to tell perfectly.

Overall, this is a fairly decent production and a visually pleasing entry into the series’ franchise that I find myself fond of. However, as mentioned before, because the expected audience are readers of the manga series, this isn’t exactly newcomer-friendly in regards to the characters and setting. You really will have to read the source materials to get to know the facts better.

That being said, if you are a curious fan of the Supernatural or Slice-of-Life genres and haven’t read the series yet, this is your ticket into seeing a tiny bit of what’s in store for you and should be watched.